The American bullfrog is a large and voracious North-American frog. The species is well known for having an insatiable appetite and eating pretty much everything that it can swallow. This includes insects, frogs, toads, rodents, fledglings of several aquatic bird species and juveniles of other mammals. When introduced in our regions bullfrogs quickly colonize ponds and, due to their voracious nature, quickly start dominating whole ponds. The introduced frogs will eat the resident amphibian species such as toads, green frogs, European common brown frogs and several newt species. On top of this, young bullfrogs eat the same smaller invertebrates that the resident amphibians eat, causing additional competition stress.

In it’s native habitat, bullfrogs fall victim to alligators, larger snake species, snapping turtles, North American river otters and raccoons. However these species are absent in Flanders. So when a bullfrog is released here, it encounters little to no natural enemies allowing it to reproduce freely. Several life stages of the bullfrog are apparently distasteful to many animals, although tadpoles are sometimes eaten by some of our aquatic birds and predatory fish. However the impact of this is fairly low as a single female bullfrog can lay up to 20000 eggs.

The American bullfrog is a carrier of several pathogens, including the chytrid fungus that is responsible for severe amphibian declines worldwide. It also carries the rana virus, which is another pathogen that can rapidly spread and cause high mortality rates in amphibian populations. The bullfrogs themselves seem unaffected by these pathogens, but our native amphibians such as the endangered common midwife toad are highly susceptible to them, causing additional declines when bullfrogs are introduced into a pond.

Because of these reasons, bullfrogs are listed on the international and European “list of 100 worst invasive species”.

Escaped from rearing facilities and ponds

The American bullfrog was imported into Europe together with fish for ornamental purposes in ponds, for fishing or for aquaculture. In the early 90s, tadpoles were regularly offered for sale in garden centers and specialized pet shops. Tens of thousands of tadpoles found their way into garden and fishing ponds. But off course tadpoles grow legs and become frogs. Because most garden ponds are unsuitable frog habitats, these young bullfrogs left their garden homes behind in search for more suitable environments. The habitats of choice are often fishing ponds and the likes, mostly aquatic habitats that are frequently disturbed by human activities. Some of the tadpoles and frogs were also purposely “released” from garden ponds and aquaria into nature.

Where can you find bullfrogs?

In Flanders there are several populations that reproduce and sustain themselves autonomously.

How can we combat their spread?

The traditional methods for eliminating bullfrogs from ponds consists of a combination of setting up fykes to catch tadpoles and frogs, shooting adults and juvenile frogs and drying or filling up ponds to eliminate suitable habitats. Adult and juvenile frogs are usually caught with single fykes, which consist of a long leader net leading up to a series of connected funnels, which end into a capture net. The leader net is attached to the shore and leads into the pond to make sure that any frog that comes across this net swims into the funnels, ensuring its capture. Double fykes are similar in build; with the exception that both ends of the leading net lead to funnels. These double fykes are set up into the pond without a connection to the shore, and are primarily used for capturing tadpoles. Although adult frogs can be captured with these fykes, capture rates are usually low. The most effective way to eliminate adult bullfrogs from a pond is to eliminate the pond, but this is not always possible or desirable.

Here you can find a demo on how these fykes are set up and used.

For the isolated populations in the municipalities of Kasterlee, Hoogstraten, Arendonk and Huldenberg it was decided to stick with the traditional methods of placing fykes. In the years directly following the elimination of the populations it is essential to closely keep monitoring these sites to ensure that no new reproduction has started and that any adults that were left behind can be removed. 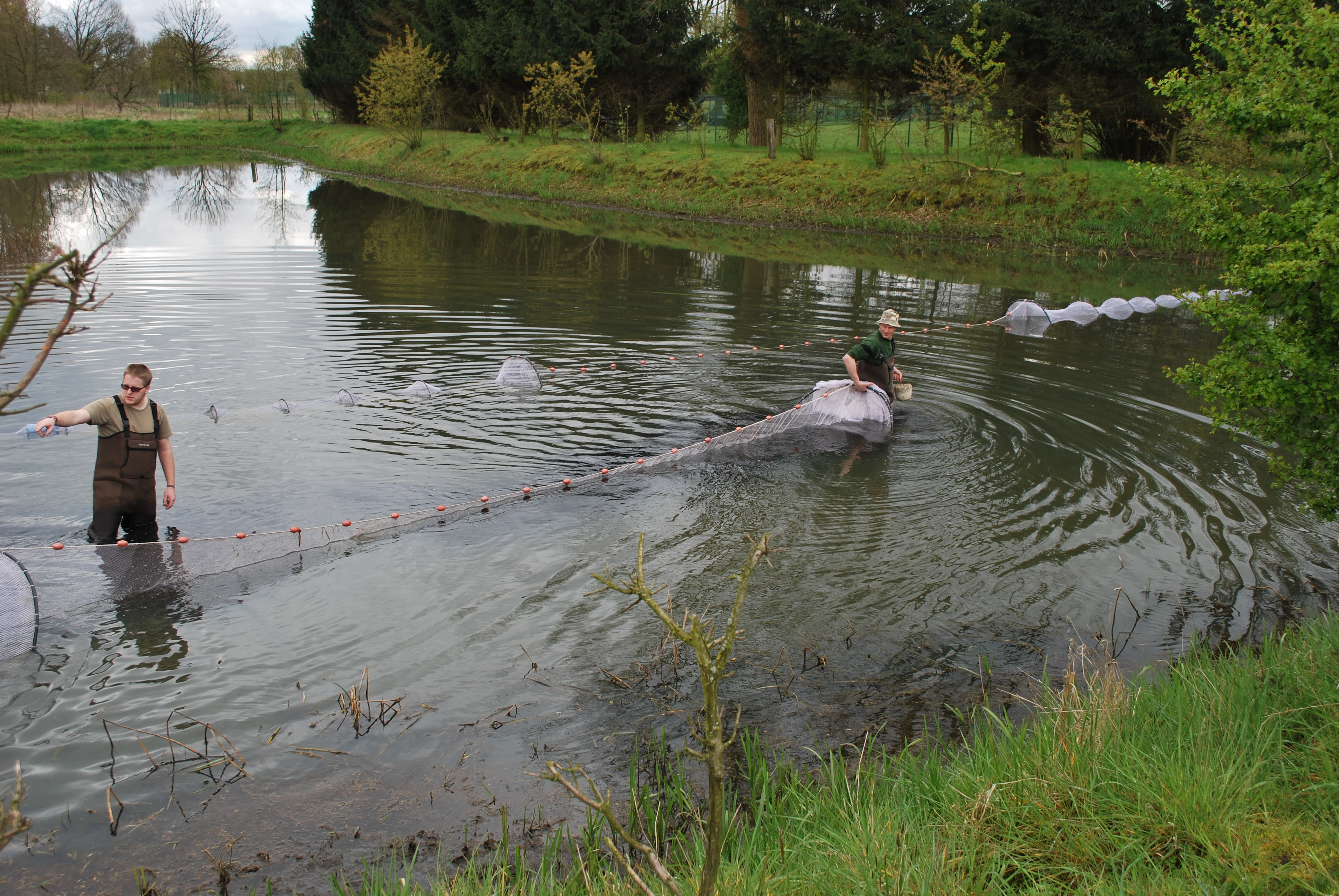 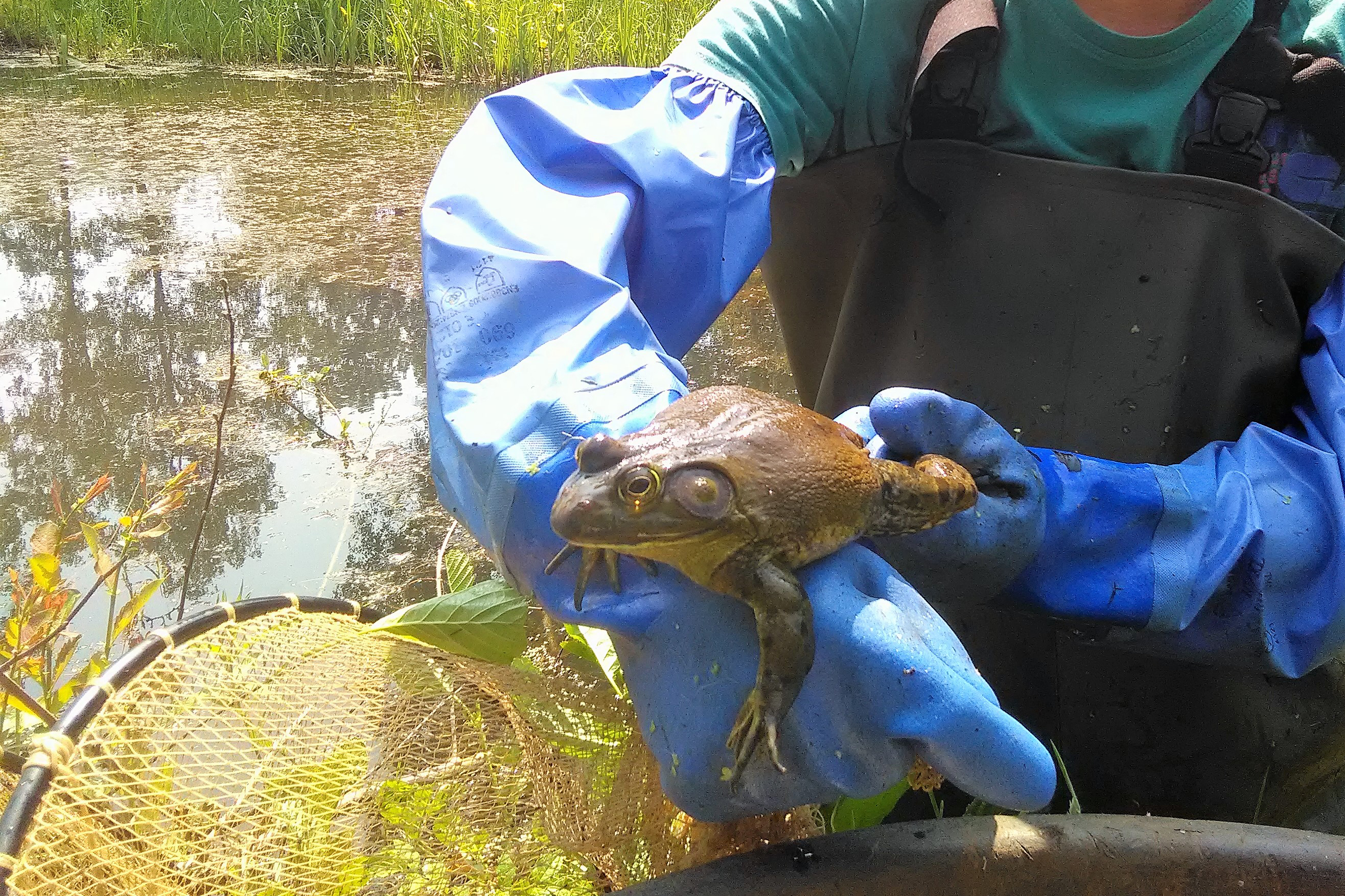 In the valley of the Grote Nete, where most populations are connected through a network of ponds, these traditional methods as a standalone are no longer feasible as a strategy. Here the first tests will be conducted with sterile male frogs that were reared by the PXL University. This will be done in several enclosed ponds in the Scheps nature reserve. Releasing sterile males is a technique (aptly called sterile male release technique or SMRT) that is currently used for managing several pest insect populations such as mosquitos. However this projects represents the first effort of using SMRT for controlling invasive amphibians. After several years of research, the PXL University has succeeded in developing a technique to breed sterile frogs from fertile frogs, which were caught from the populations that are already present in Flanders. You can find videos on this process here on our facebook page. The technique involves placing newly fertilized eggs in a high pressure chamber for a short amount of time, which induces triploidy in the growing embryos. A triploid frog has three sets of chromosones in  every cell instead of the normal two. Because these frogs have an aberrant amount of chromosones, they cannot reproduce and are effectively sterile. These triploid embryos hatch into tadpoles which are reared in special enclosures in the ponds of the Straalmolen in Balen. After the tadpoles morph into juvenile frogs they are transferred to several enclosed ponds in the Scheps nature reserve in Balen, where they can develop further into adults and compete with the bullfrogs that are already present. Applying this technique is currently the most animal friendly and cost efficient way to diminish the populations of bullfrogs that are present in Flanders. As the sterile male frogs attempt to fertilise eggs, they lower the amount of tadpoles that hatch, which lowers the amount of frogs that make it to adulthood. If enough egg clutches do not hatch, it is possible that no new frogs make it to adulthood, effectively halting the spread of the populations.

Have you seen or heard an American bullfrog? Let us know!

It is therefore of the utmost importance to quickly deal with new sightings of bullfrogs. Have you seen or heard a bullfrog? Let us know by entering the sighting on www.waarnemingen.be. 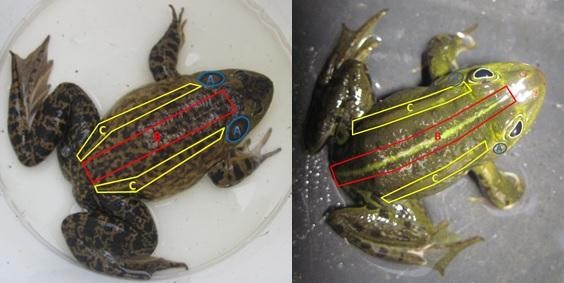 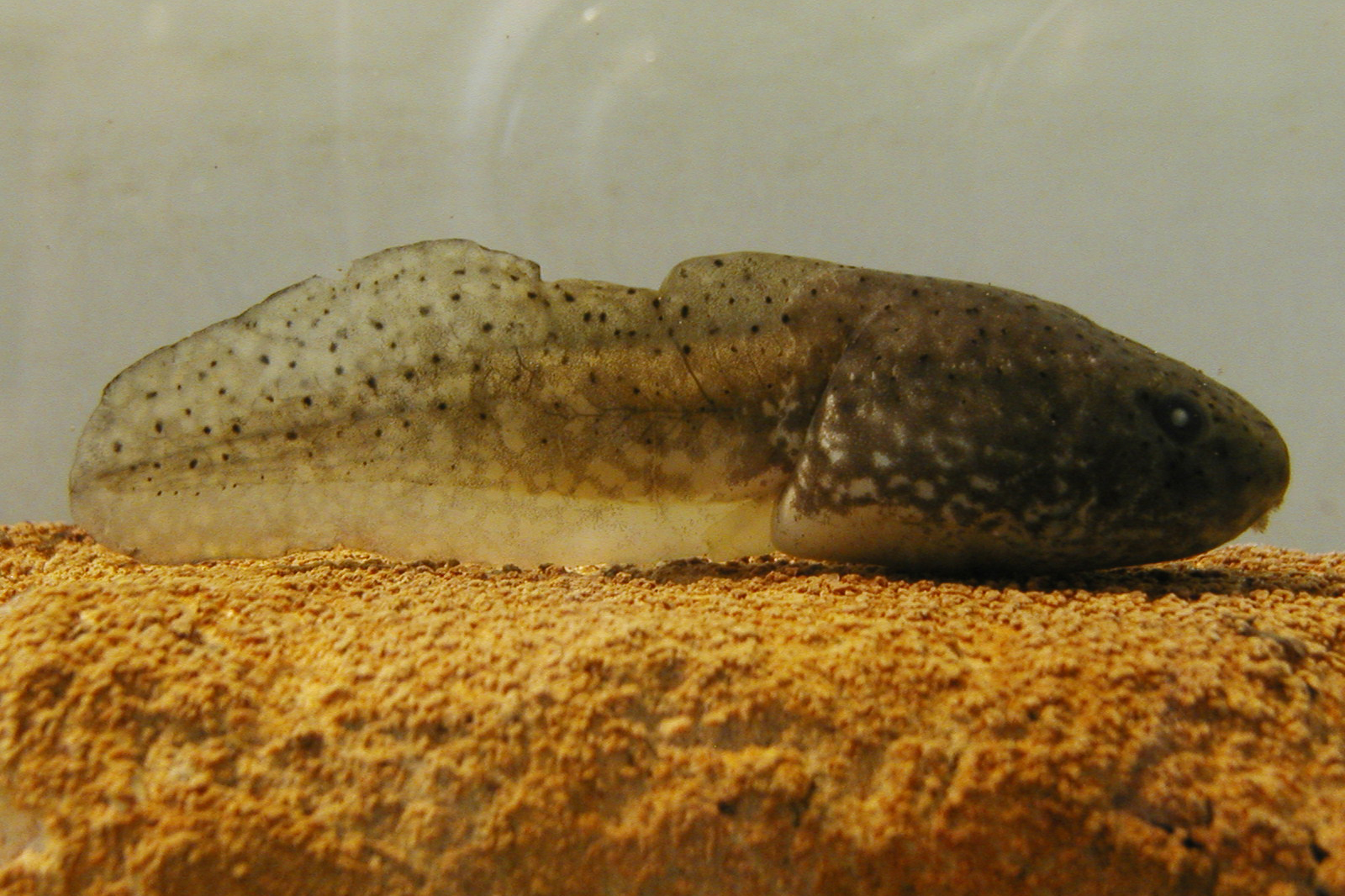 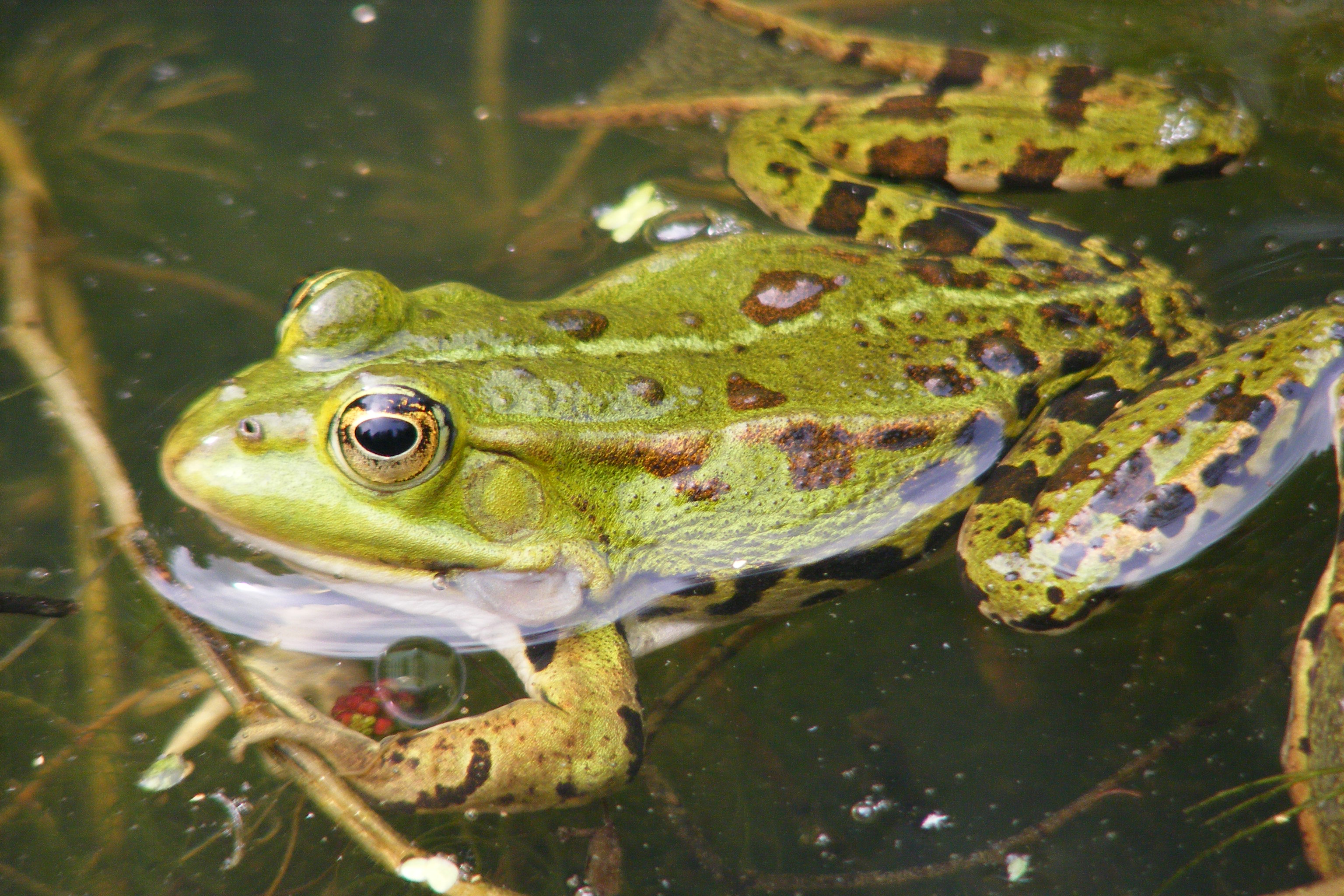 Do you want to know more?