The Agency of Nature and Forests executed within the Belgian part of the project area of LIFE+ FLANDRE several actions that are not co-financed by LIFE but that are complementary to the project and add to its impact. 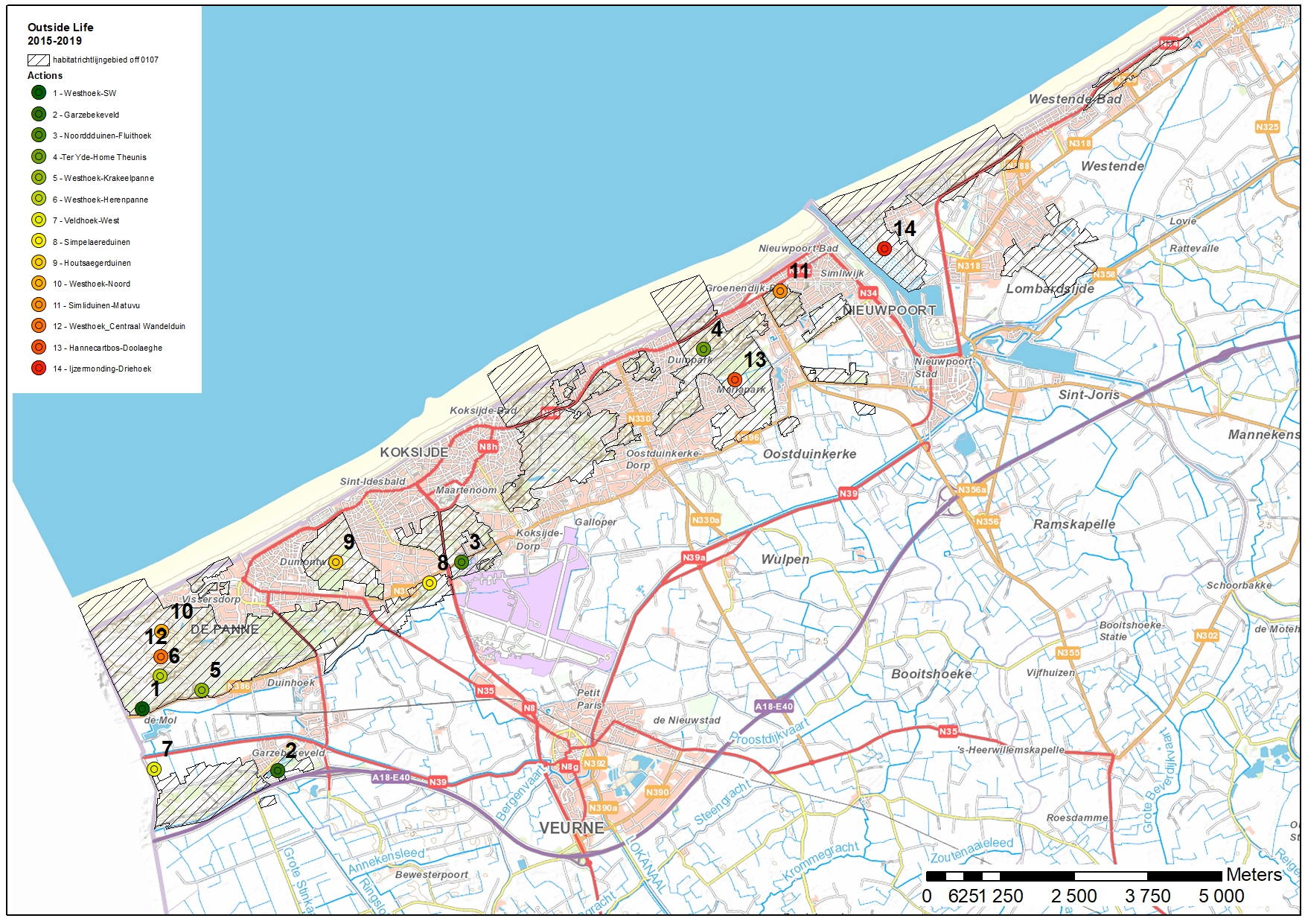 Map: location of the “Outside LIFE”- actions

1. At De Panne, in the Nature Reserve ‘Duinen en Bossen van De Panne’, partim ‘De Westhoek’, adjacent to the Belgian-French border: Removal over a superficies of 1,25 ha of white poplars to restore the targeted habitat ‘2130* Grey dunes’. The works also included the establishment of a grazing unit by the placing of a fence over a circumferential length of 1,2 km, the digging out of a pond (aquatic biotope of targeted species Great Crested Newt) and the removal of several small constructions. Executed from the 19th February until the 23 October 2015. 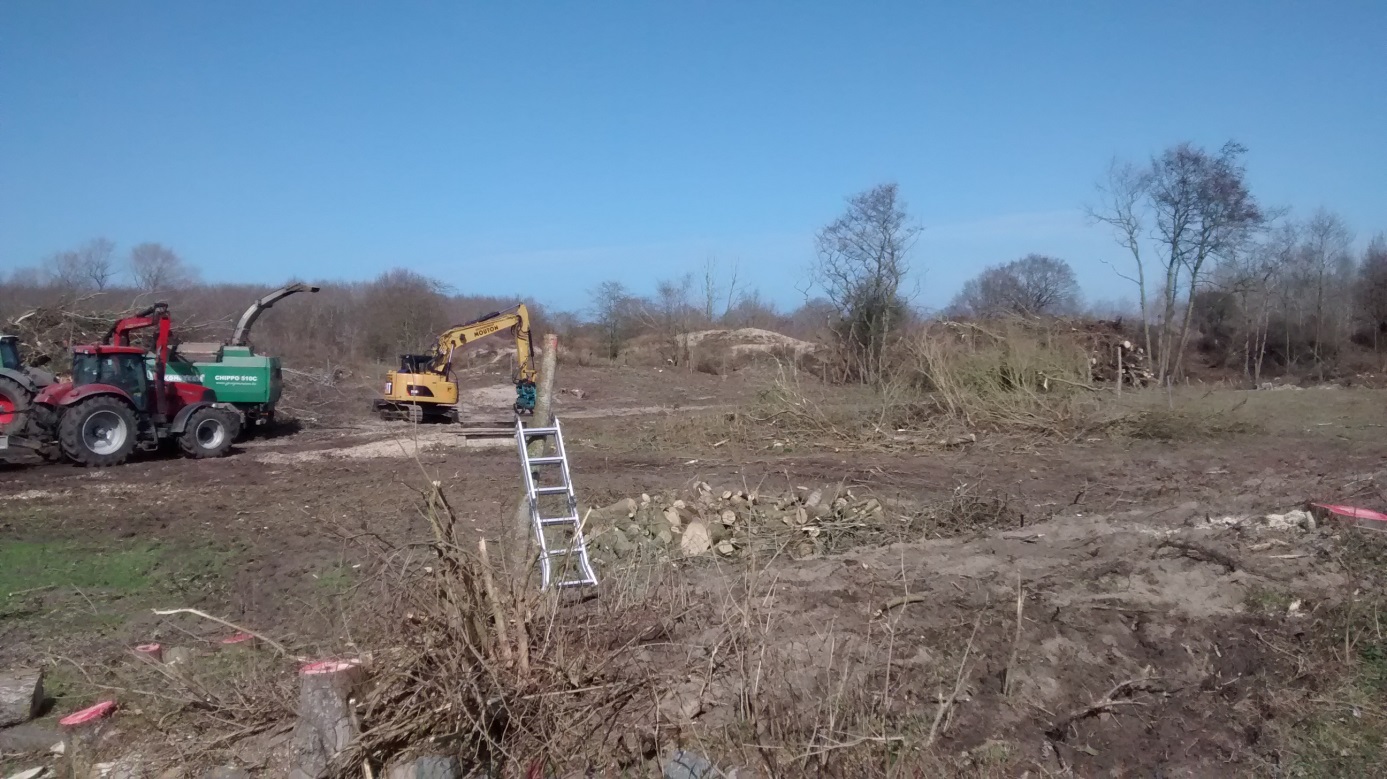 2. At De Panne-Adinkerke, in the Nature Reserve ‘Duinen en Bossen van De Panne’, partim ‘Garzebekeveld’. Removal of willows and poplars over a superficies of  about 1,7 ha, cutting off sods over a superficies of 0,3 ha, removal of sludge from a pool with a superficies of 0,23 ha, digging out of new pools, and placement of a fence with a circumference of 2,3 km to restore the targeted habitats ‘2130* Grey dunes’ and ‘2190 Humid dune slack’ and to provide aquatic habitat to Great Crested Newt. Executed from the 23rd February until the 23 October 2015. 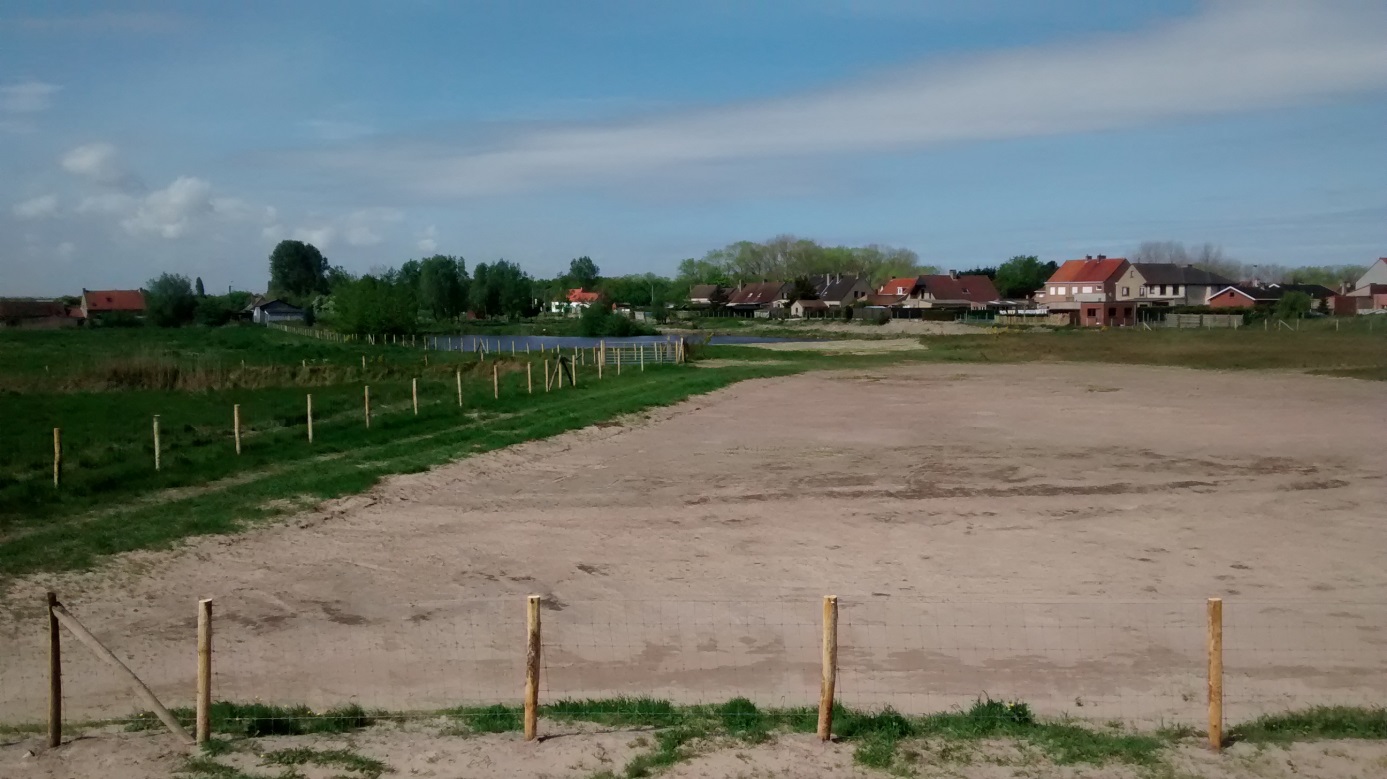 3. At Koksijde: in the Nature Reserve ‘Noordduinen’, partim ‘Fluithoek’: Excavation of topsoil to a depth of 30 cm over a superficies of 1 ha to restore the targeted habitat ‘2190 Humid dune slack’. The works included also the digging out of a large pool as aquatic habitat of Natterjack Toad. Executed from the 5th of October 2015 until the 16th of October 2015. 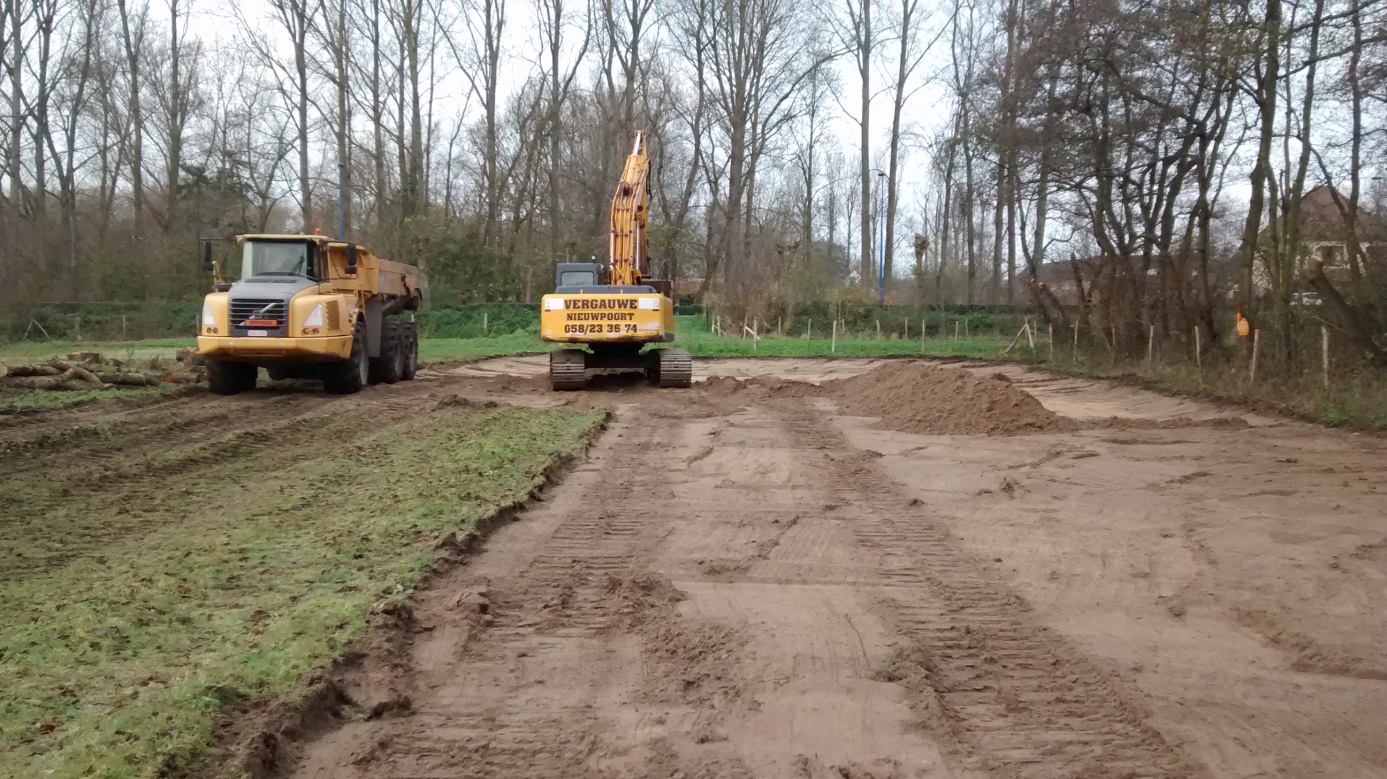 4. At Koksijde (Oostduinkerke), in the Nature Reserve ‘Ter Yde’: Sieving of the sand of the dunes to remove stone rubble and Dewberry (Rubus caesius) from it to restore sand drift dynamics and the targeted habitat ‘2120 White dunes’ over a superficies of 4,05 ha. Executed from the 10th August 2015 until the 21st August 2015. This operation was repeated in the summer of 2020 to keep the aeolian sand drift going. 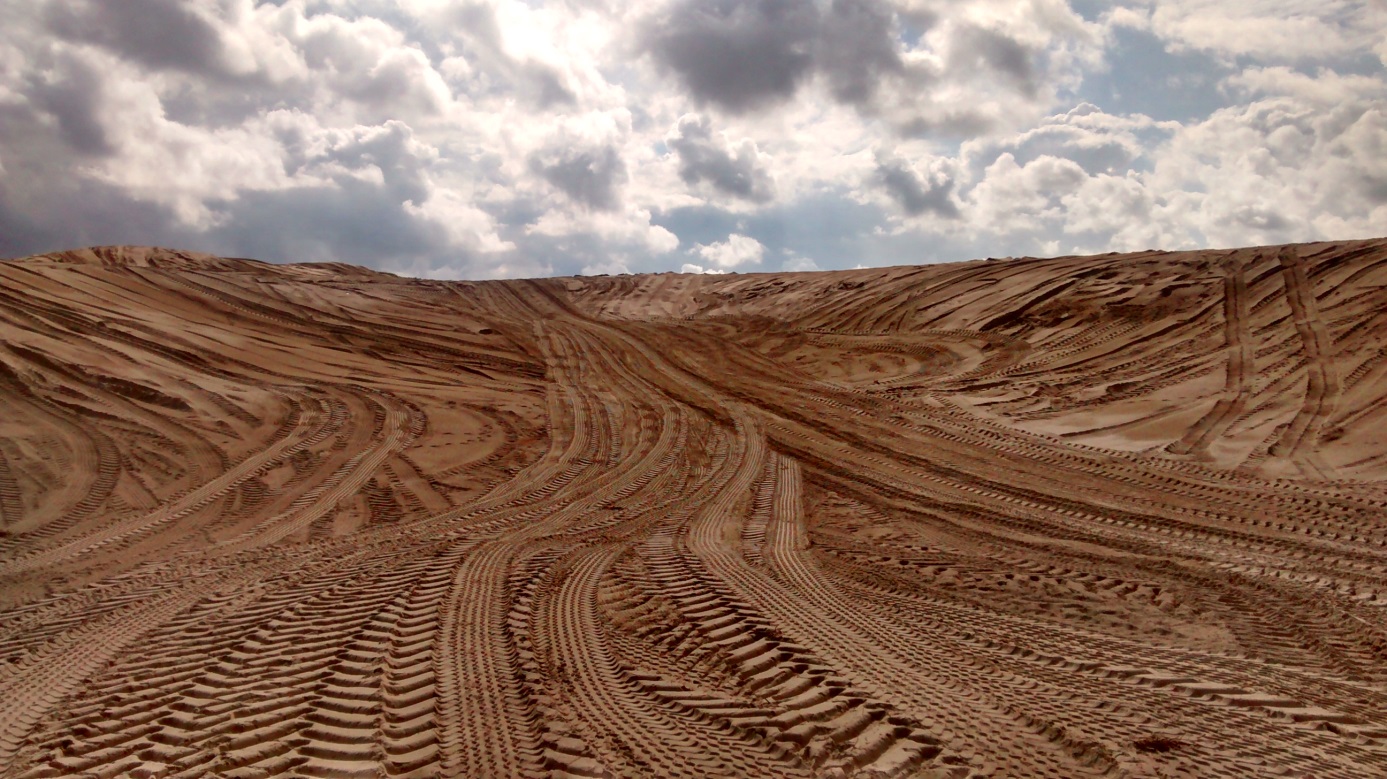 SN. The ANB acquired by purchase act of 18 December 2015 a stretch of dune ground at De Panne adjacent to the Nature Reserve ‘De Houtsaegerduinen’. The purchased site, with a superficies of 1 ha 39 a 34 ca, consists of a series of small sandy former arable fields, dating from the 19th century and abandoned several decades ago and used by the former private owners for a long time as a horse meadow. The former  arable field parcels are separated from each other by wooded banks, planted with Alder (Alnus glutinosa) and include the ruins of a former fisherman’s house. Because only a limited  portion of the site is included within the delimitations of the Natura 2000 network, this land purchase is not eligible for LIFE co-funding. However the ANB intends to restore and maintain the historical wooded banks and hedgerows and to develop flower- and insect-rich grasslands on the former sandy arable fields. The wooded parts of the site also offer terrestrial biotope to the target species Great crested Newt (Triturus cristatus, code 1166) of which reproduction  is regularly observed in the pools of the adjacent Nature Reserve ‘De Houtsaegerduinen’. Also fruit trees will be planted in the direct neighbourhood of the ruins of the fisherman’s house to improve the quality of the environment for the Garden dormouse (Eliomys quercinus) of which a population is still present in the LIFE+ FLANDRE project area. 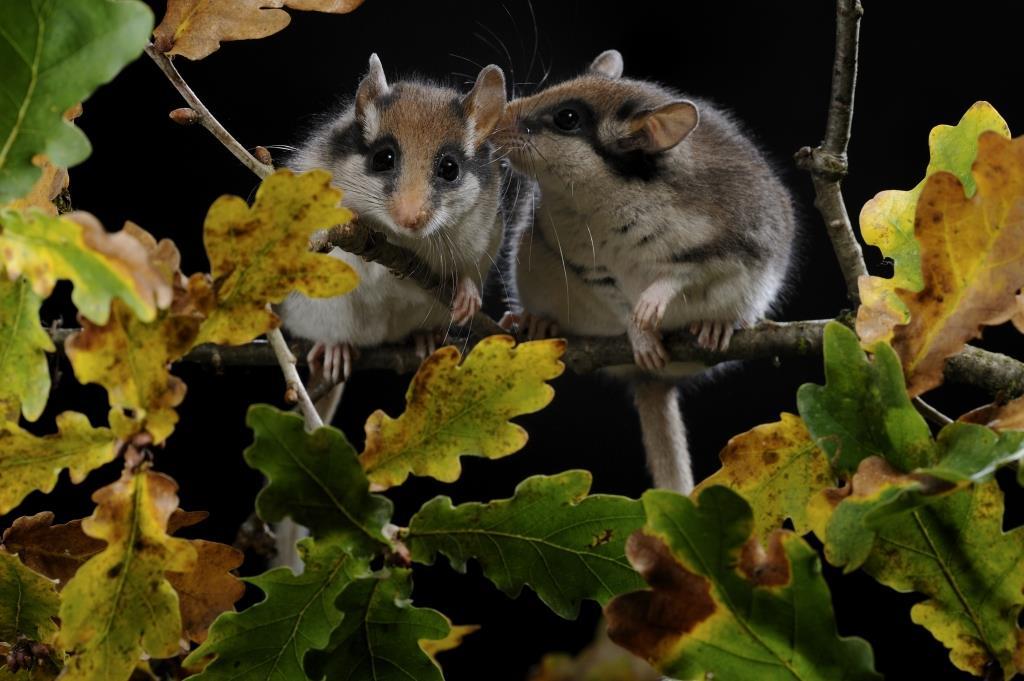 5 and 6. At De Panne, in the Nature Reserve ‘Duinen en Bossen van De Panne’, partim ‘De Westhoek’, adjacent to the Belgian-French border: Removal of scrub and of the topsoil layer to restore over a superficies of 1,56 ha the targeted habitat ‘2190 Humid dune-slack’. Two pools were excavated to offer aquatic habitat to Natterjack toad and Great Crested Newt. The works were executed from the 22nd of August to the 30th of November 2016. 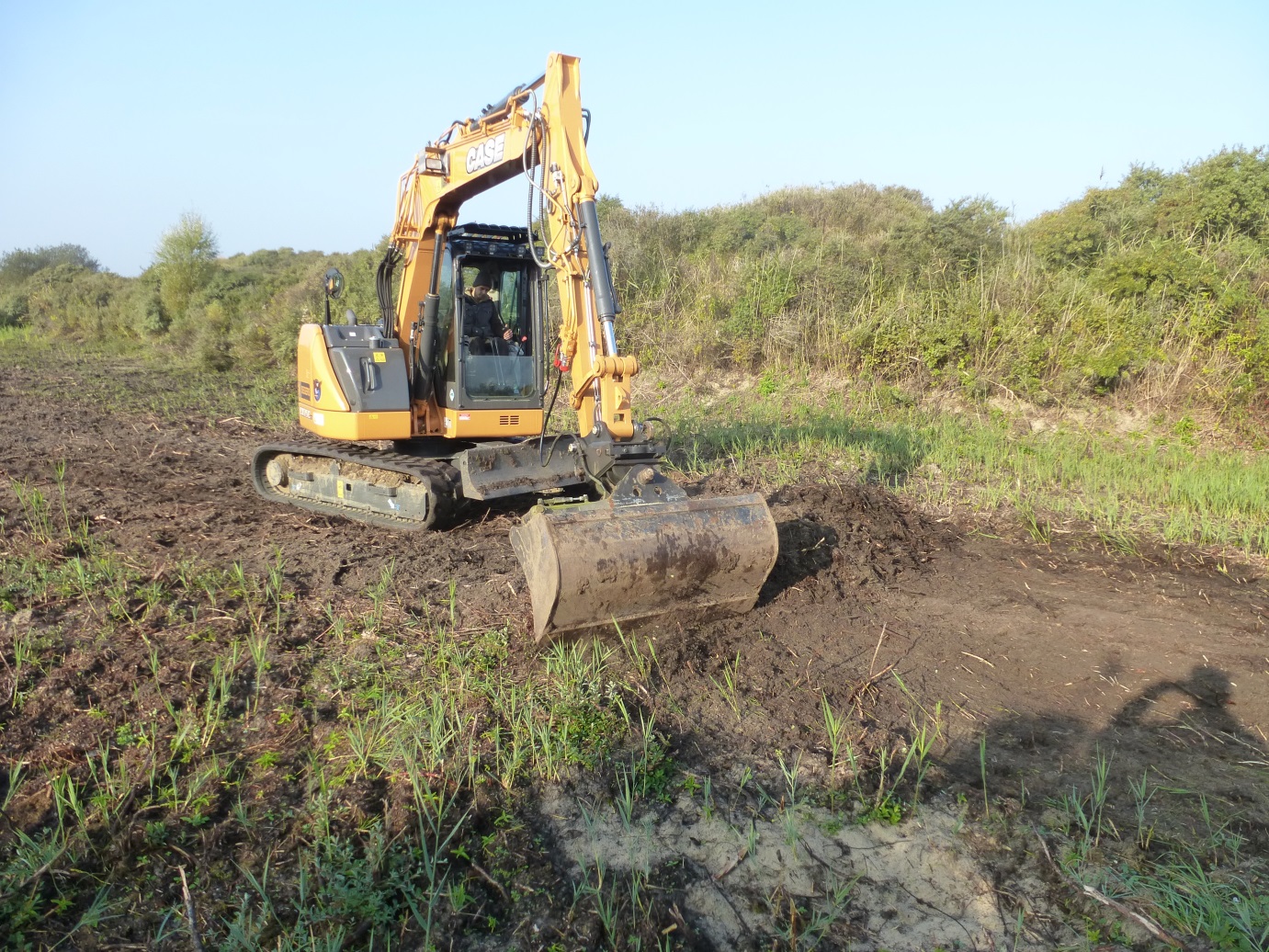 7. At De Panne, in the Nature Reserve ‘Duinen en Bossen van De Panne’, partim ‘Zwarten Hoek’ and the ANB-parcel ‘Veldhoek’: excavation of shallow ditches along the banks of the pond (small lake) ‘Drie Vijvers’ and of several pools in nearby flat meadows. The ‘Zwarten Hoek’ is located outside the Natura 2000 – network, but in a dune/polder transition plain that stretches between the ‘De Westhoek’ (actual coastal dunes) and the ‘Cabour Domain’ (so called ‘fossil’ dune ridge), both of which are sub-areas of the SAC ‘BE2500001 Duingebieden inclusief IJzermonding en Zwin’ and of the Nature Reserve ‘Duinen en Bossen van De Panne’. The objective of the works is to provide aquatic habitat for the Natterjack Toad and the Great Crested Newt in order to facilitate migration and gene exchange between the populations of both target amphibian species present in the ‘Westhoek’ and the ‘Cabour Domain’. The shallow ditches and pool provide a ‘stepping stone’ for migration between ‘De Westhoek’ and ‘Cabour’, contributing to the development of an ecological connection between both dune sites that are sub-areas of the same SAC. Total superficies of newly created shallow ditches and pond: 0,49 ha. The works were executed from the 24 August to 6 September 2016. 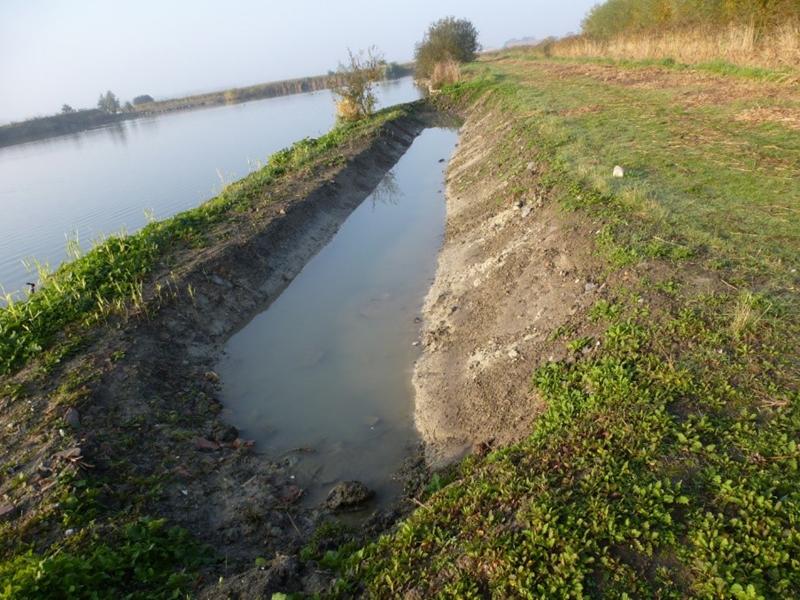 8. At Koksijde, ‘Belvedèreduinen’: demolition of 7 small buildings and other constructions to restore habitat type ‘2130* Grey dunes’. The demolition works were carried out from the 27 September to the 4 October 2017. One derelict construction was not demolished because it offers nesting opportunity to the Garden Dormouse. 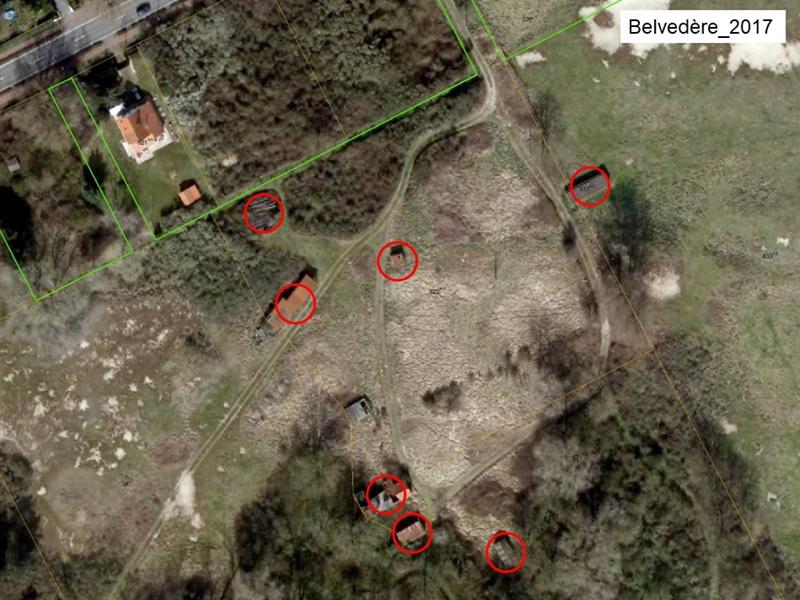 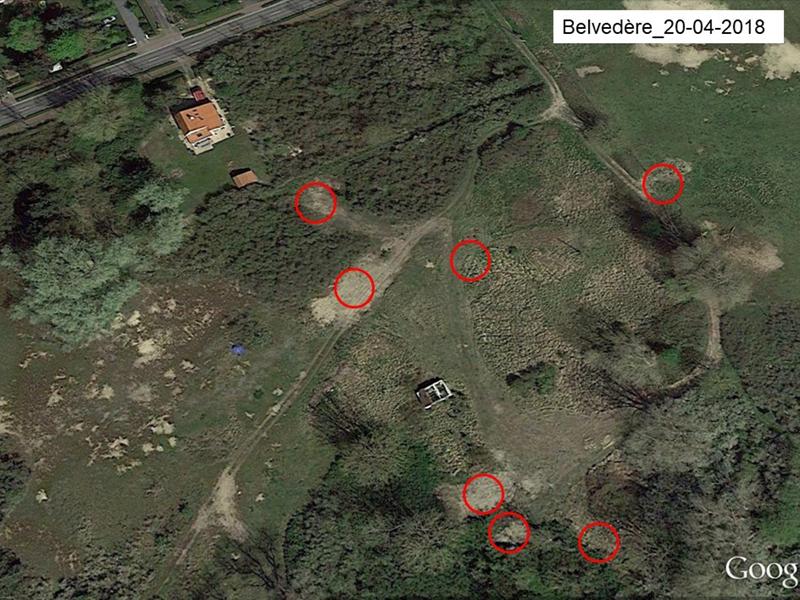 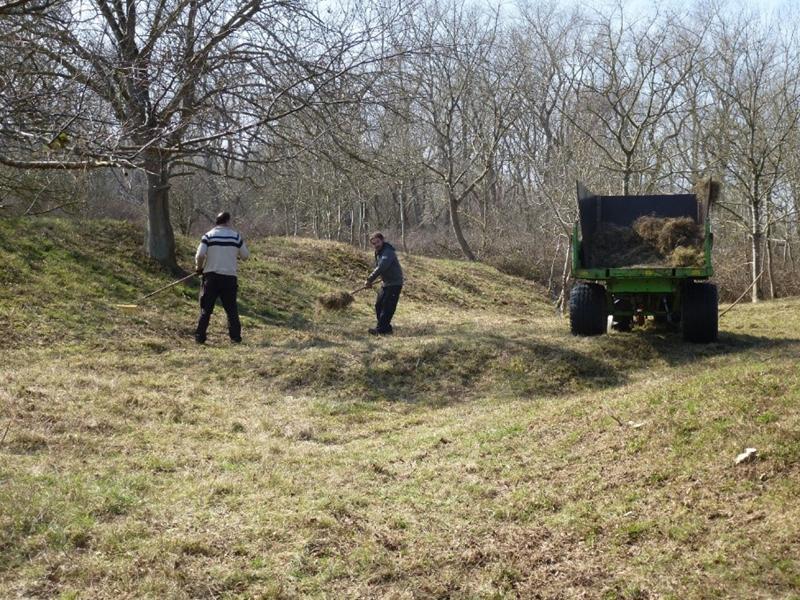 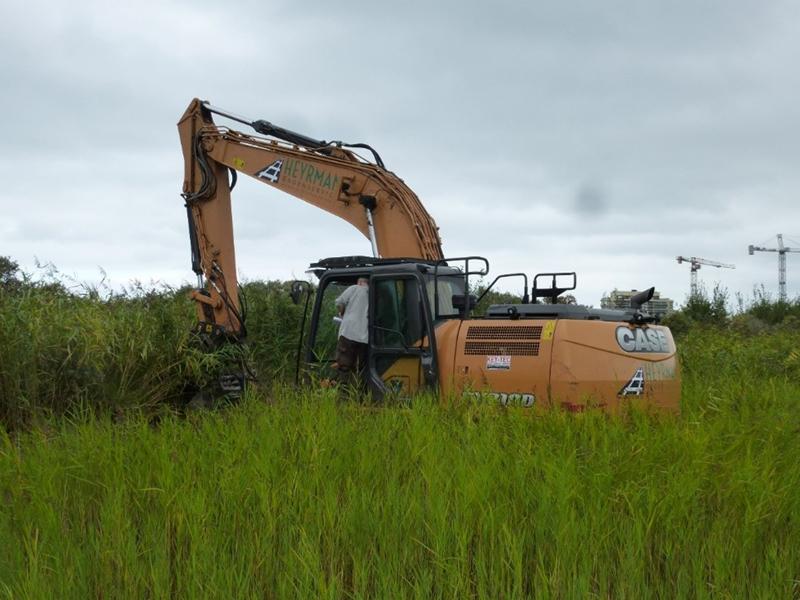 11. At Nieuwpoort, in the ‘Simliduinen’ (acquired by the Flemish Region – ANB on 27 January 2017 in the frame of action B.1,: removal of former tennis courts and mini-golf to restore the habitat ‘2190 Humid dune slack’ over a superficies of 0,59 ha.
The removal of the constructions was executed from the 21 February to the 28 September 2019. The removal of the tennis courts and mini-golf to restore a humid dune slack are co-financed by the INTERREG V project VEDETTE, acronym of ‘Vers une Ecodestination Transfrontalière d’Excellence’, webpage: https://www.natuurenbos.be/interreg-v-project-vedette. As the name of the project suggests, this INTERREG V –projects major objectives are oriented towards the eco-touristic and nature-based recreational use of the region between Dunkirk and Westende (not only within the Natura 2000 network). Partners in that project are, besides the 3 LIFE+ FLANDRE project partners, the Province of West-Vlaanderen, the Vlaamse Landmaatschappij, the Communauté Urbaine de Dunkerque, the Centre Permanent d’Initiatives pour l’Environnement (CPIE Flandre maritime) and the Agence d’Urbanisme (AGUR). These partners are all represented in the Advisory Committee of LIFE+FLANDRE. Although rather strongly oriented to eco-tourism and natur-based recreation, the INTERREG V VEDETTE project also includes some conservation actions, such as the restoration of a dune slack by the removal of a sport complex in the ‘Simliduinen’ at Nieuwpoort and the experimental reactivation of Aeolian sand drift dynamics in the ‘De Westhoek’ at De Panne.  None of these ecological restoration measures were included in the LIFE+ FLANDRE project program. 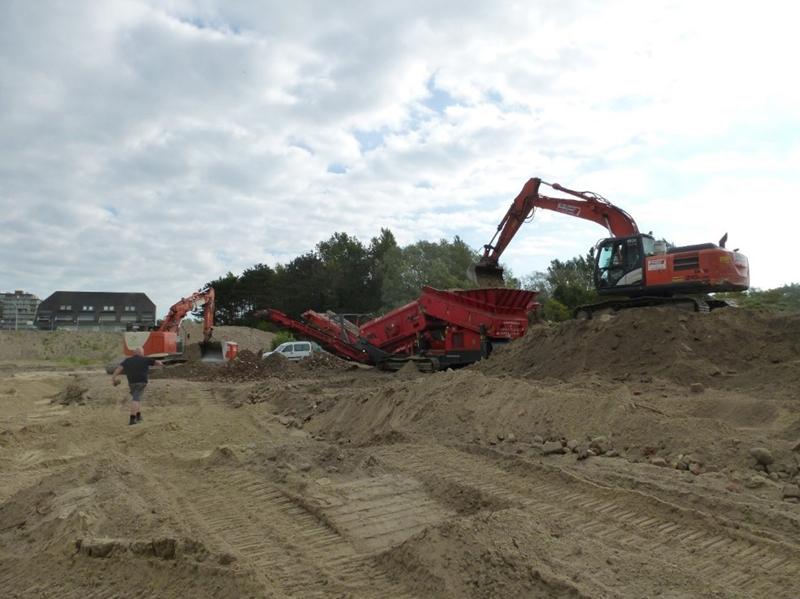 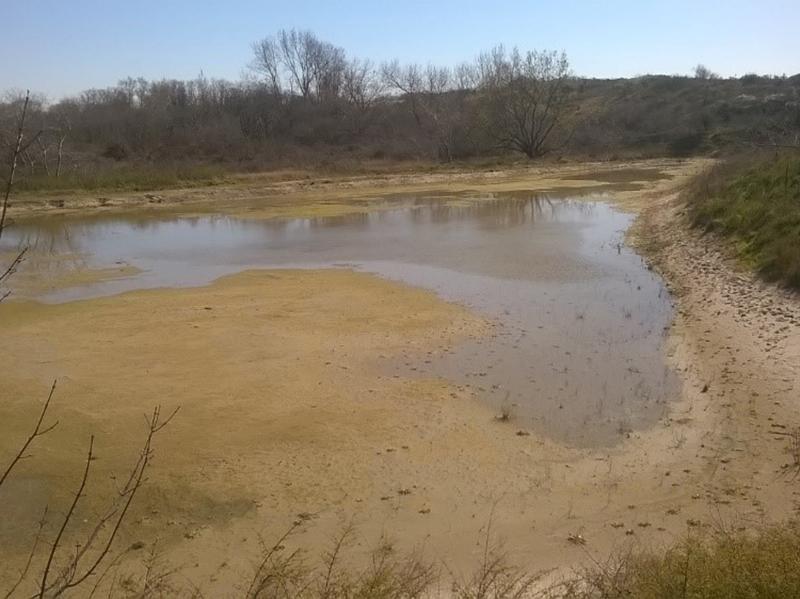 13. At Koksijde (Oostduinkerke), in the Flemish Nature Reserve ‘Ter Yde’, partim ‘Hannecartbos’: removal  of a stretch of declining Alder plantation along the ‘Brook without Name’ and clearing of the brook to restore the habitat ‘2190 Humid dune slack’ over a superficies of 2 ha as an extension of the area (6 ha) that had been cleared of alders in the frame of the LIFE Nature project ‘FEYDRA’ (2002-2005), to successfully restore humid dune slack habitat. Works implemented between 10 September and 4 December 2018. 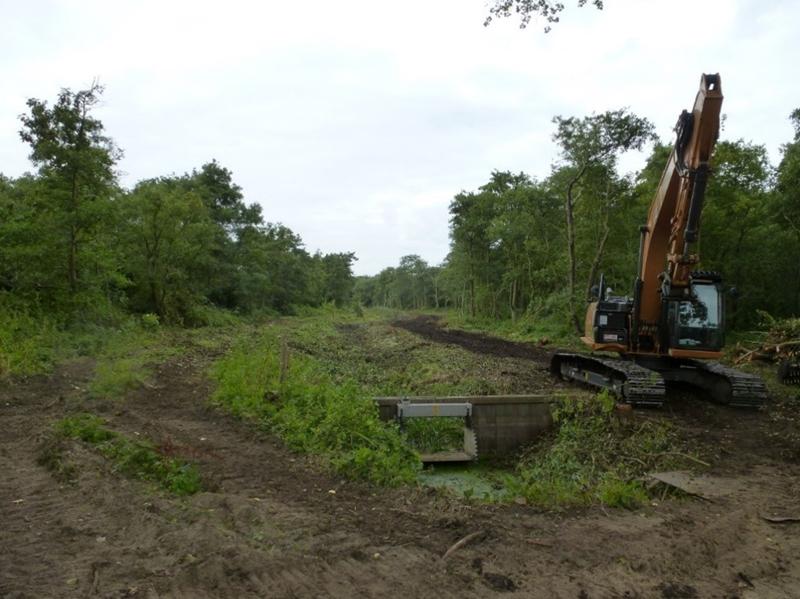 14. At Nieuwpoort, in the nature reserve 'De IJzermonding' (‘Yser-estuary’), the excavation of a former dump of dredged silt to restore the tidal habitats '1130 silt banks' and '1310-1330 Atlantic salt marshes', also resting places of harbour seal and foraging area for numerous wading birds, over an area of 1.80 ha. The works were carried out from 7 January to 4 October 2019. This work was partly financed by the MDK Coastal Department. 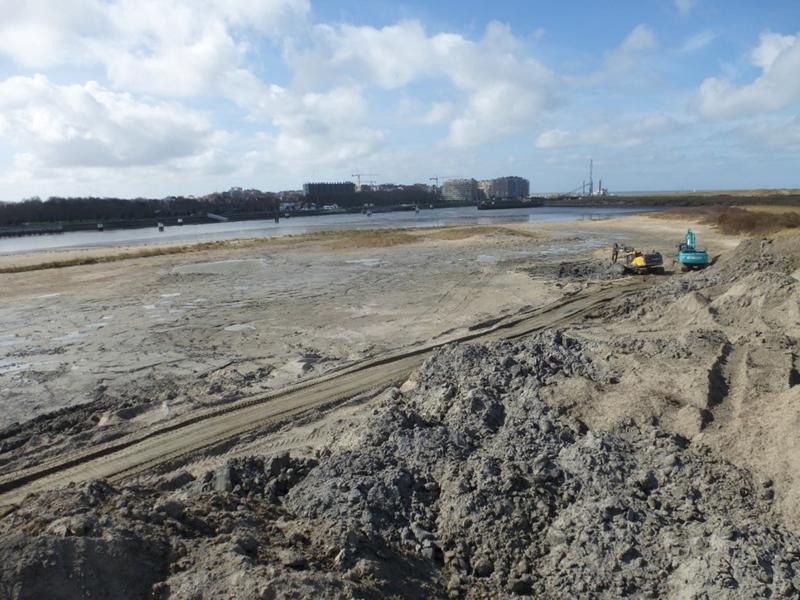 Photo: the dredging sludge dump is being excavated - © Luc David 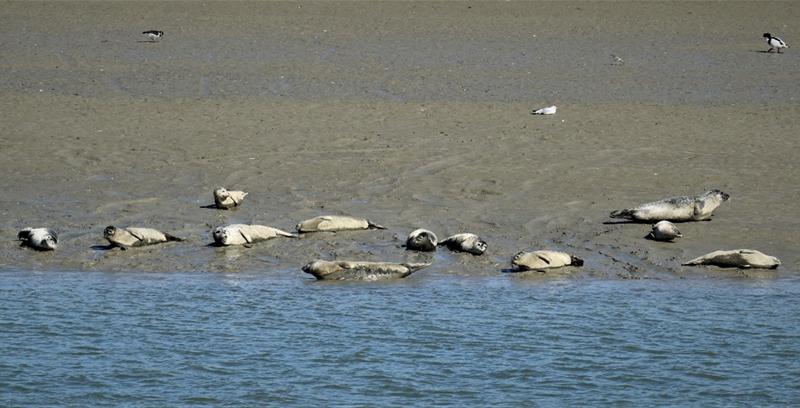